Posted Jan 14 by Jon Forman
One of the world's largest muscle car museums is auctioning off its cars
Rick Treworgy's Muscle Car City is one of the biggest collections of high-performance American cars in the world. With over 200 cars of mostly GM makes, it's a mecca for fans of the golden age of Detroit iron. Unfortunately, the museum will be shutting its doors for good on Jan. 17 and auctioning off most of its assets with no reserve...here is the link for the Autoblog news article:
https://apple.news/A8K2DiluZQ8SH5bJ5p5ZytQ
Posted Monday January 4, 2021. What you see below is reportedly TRUE. I checked with snopes.com because I was not sure. The owner of these creepy things is Boston Robotics, a division of Hyundai, who recently acquired Boston Robotics. Look for these in the future, probably in our military.
THE HUMMER IS BACK! As a $112,000 electric pickup from GMC.......available to cRc members in 2021.  Get yours on order now....SUV will be available later as well as slightly less expensive models.......range 350 miles on a charge.

General Motors' Hummer brand, is poised to make a comeback for 2022 as an all-electric. The resurrected Hummer will appear first as a pickup truck and later as an SUV. The new pickup is shaping up to be quite the beast, with up to 1000 horsepower from its top powertrain option, which uses three electric motors, offers an estimated range of 350 miles per charge, and a leaps to 60 mph in 3.0 seconds. The Hummer EV also features removable roof panels, an optional adjustable air suspension, and a cool four-wheel steering feature that allows it to "crab" sideways—drive diagonally—all of which should make it fun to take off-road. Pickup trucks are the next frontier for electric vehicles, as potential rivals from upstarts Rivian, Bollinger, and Tesla—as well as established automakers such as Ford—are preparing their own entries in this emerging segment. 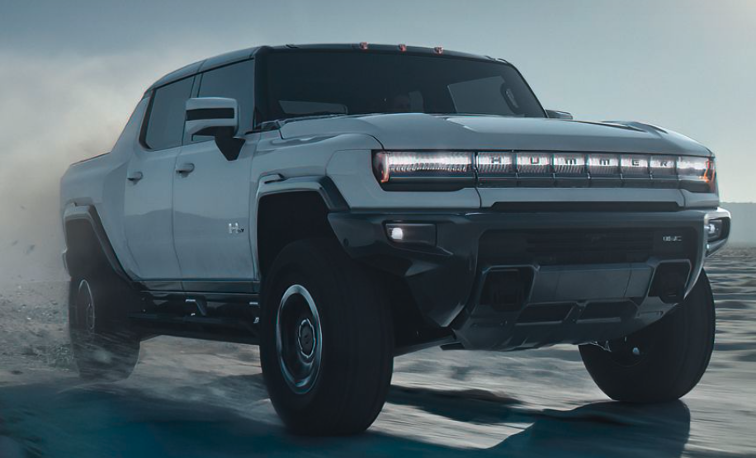 October 4 - we don't know where this was taken but it would have been fun to have been there in person....

Posted January 24th - edited from Car and Driver about a new self driving vehicle from a partnership between G.M and Honda - the vehicle has been built, the controlling software is still years away. 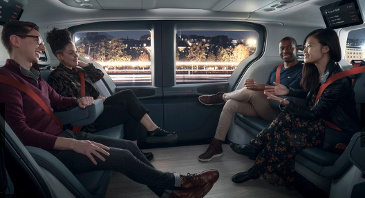 Although the venture has been testing autonomous technology on the Chevrolet Bolt EV for several years, they acknowledge that the newly revealed Origin's autonomous setup has not yet been built. So it's likely we won't actually see a completely autonomous vehicle like this out on the road for as long as a decade.
Looks Like a Shuttle Bus
The Origin's design doesn't break any new ground. It looks like a lot of self-driving shuttles that are already deployed out in the world and a bit like a smaller version of Toyota's e-Pallet, which is going to shuttle visitors and athletes at the 2020 Summer Olympic and Paralympic villages.
The modularity extends to the exterior sensors as well. When the vehicle is deployed, it's expected to last for a million miles, according to Cruise. If that happens, the sensors will eventually become obsolete. Which is fine, because they're made to be replaced when needed.
Because EVs are essentially a battery pack, motors, controllers, cables, and wheels, it can be easier to expand on a platform.  The current Origin could be joined by a larger vehicle sometime in the future.
But it all relies on Cruise's ability to develop self-driving software.  They've built the vehicle; now they have to build the robot that drives it.
Link to Chevrolet and the Corvette
The new Corvette is a reality and is getting major positive reviews. Who will be the first in the cRc to own one? It is surely to be a collector's item, especially the 2020 model year. don't you wish you had purchased and still owned one of those 1953 Vettes?
This is Corvette No.1 which rolled (probably pushed) off the small assembly line in Flint, Michigan on June 30, 1953. Wonder what it is worth now or if it even still exists..... 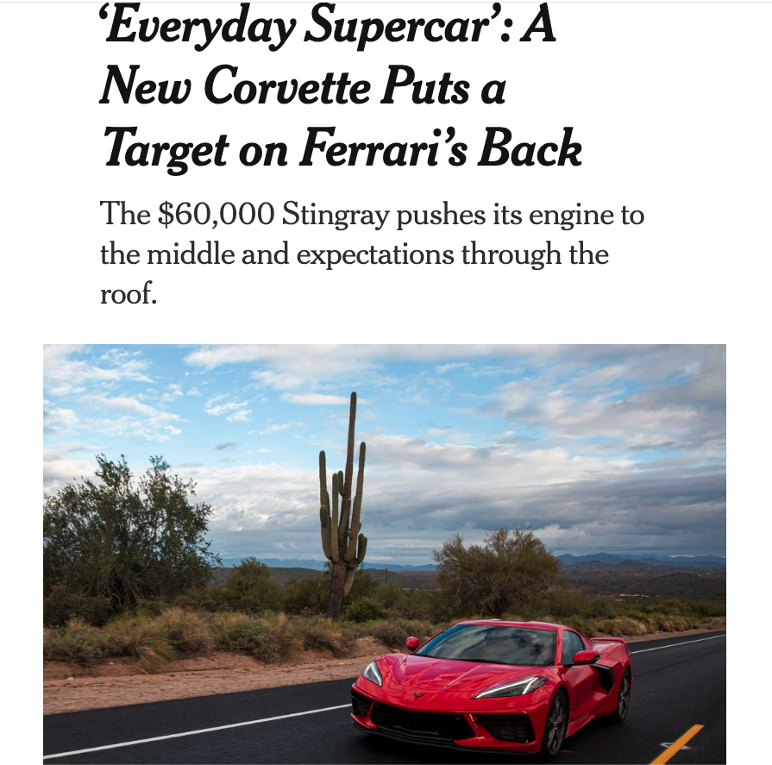 Ford unveils the long anticipated Mustang Mach-E....0-60 in 3 seconds? are you kidding me? 300 mile range. Will it work as advertised? Will it revolutionize the Pony cars? All cars?
https://www.caranddriver.com/ford/mustang-mach-e
Click above to check it out. Look below to check it out.

Posted December 21: The world's most costly ad, at $6,200,000   World's most costly advertisement and winner of Best Ad of the World.... took 606 takes.....total cost was $6.2 million for the two-minute commercial! Everything is real with no graphics....amazing precision.... made from parts of Honda Accord.
POSTED DECEMBER 14, 2019 interesting facts(?) about cars from the internet:
1. The average fuel cost across all vehicles is 14.45 cents per mile, or about 23 miles per gallon.
2. The best selling car of all-time is the Toyota Corolla.
3. The U.S. consumes about half of the world’s gasoline.
4. Ferrari manufactures a maximum of 14 cars a day.
5. Although 1886 is credited with being the birth year of the modern automobile, the first gas gauge wasn’t installed until 1922.
6. Every year, over $60 billion worth of car maintenance goes unperformed.
7. The average consumer spends $400 a year on diagnostics, scheduled maintenance, and tune-ups.
8. Traffic congestion wastes three billion gallons of gas each year.
9. The first windshield wipers were hand-operated.
10. The most commonly stolen vehicle is the Honda Accord.
11. White is the most popular car color.
12. The total average repair cost in the U.S. is $305.55, including $202.28 for parts and $103.27 for labor.
13. The average American will spend two weeks of his or her life stopped at red lights.
14. 90 percent of drivers admit to signing behind the wheel.
15. The first cars did not have steering wheels. They were operated by a lever.
16. An airbag inflates within 40 milliseconds of a crash.
17. It takes half an ounce of gas to start a car.
18. Most car horns beep in the key of “F”.
19. The automobile is the most recycled consumer product in the world.
20. Faulty oxygen sensors account for 40 percent of all check engine light related issues.
Posted November 22 - HARLAN'S HOTSPOT
TESLA unveils a radical design pickup truck which can go 0-60 in 4.5 seconds!
Poster November 18th - Ford announces a new Mustang S.U.V, that is electric. Photo below and also a link to open a New York Times article about the 2020 vehicle.

Link about 2020 Mustang E
Now and then.....two videos, one of the state of the art TESLA plant, and the other of the Model T Ford assembly line......enjoy!
Harlan's guide to Zip Ties
10% ethanol or "Real Gas"?
Choosing an electric bicycle
Well of course crack reporter Jock C. has found this little tidbit and we have it semi-exclusively (well, there was this massive press release by TATA MOTORS...) but we have the possibility of an air compressed engine powering a mincar for 120 miles at about $2.00. Maybe in2020? They have been working on this since 2007......
Posted 3-2-2019 the future is going to be cool. This video is a concept from none other than AIRBUS, which tells you that BOEING is working on a similar concept. Posted by Carol Hoffman
A $3,000 windshield crack? I think I will call the $29.95 mobile tech. NOT SO FAST.........

Posted on Feb 7, 2019
Fixing a cracked windshield used to be the kind of repair a technician could perform in a few minutes in your office parking lot while you were at work. Today, the same repair could take hours and require expensive computerized equipment in a special facility. And it will probably cost much more. If the repair is not done properly, it could have dire consequences.
In this new world of advanced driver assistance systems, features like lane-keeping assistance, automatic emergency braking and collision avoidance are integrated with windshields. They can prevent horrific accidents and save lives, according to the Insurance Institute for Highway Safety, but they also involve a complex suite of sensitive components, including ultrasonic, radar and video sensors.
Cameras nestled behind the windshield, radar sensors hidden in the front grille and ultrasonic components embedded in bumpers work within narrow tolerances. A seemingly minor impact can knock them out of alignment. And as vehicles — and drivers — rely on these systems more and more, tuning these components properly can be a life-or-death matter.
Traffic lights in the Ukraine are very up to date and not only light the traditional red-yellow-green signal, but also the poles that support the lights. Wonder when the USA will adopt these. Cool.

Posted Christmas day - while Santa was making his rounds, Harlan was also. He sent over this remarkable youtube of the Barn find guy. They are still out there (young Zack) so go bring 'em back into the club. This is a longer video than we normally post...but if you have a half hour to spare.......well? What are you waiting for.
Hot rods? Hillclimb? Colorado in September when the Aspen are turning? 750 miles from Norman, 10+ hours from Norman.....cool nights? You bet. Check this link and let's go! http://hotrodhillclimb.com/
Posted July 16 by Harlan Butler..the Goodwood Road and Racing Festival of Speed is an exciting race in the U.K.  There is a somewhat live blogspot that brings this race to you. If you have a few minutes to spare, click below:
https://www.goodwood.com/grrc/event-coverage/festival-of-speed/2018/7/2018-fos-live-blog/
Editor's note: The Cimarron Cruisers website is a great source for car show information, particularly from OKC north. They also have some interesting articles, like this one about cRc member Ray Langley's 1955 Ford Crown Victoria. Below is the article, and at the bottom of the article is the link to their website.
The Cimarron Starlite Cruisers' Car Club proudly features, great classic vehicles, which belong to the good folks of Oklahoma.
The Great Oklahoma Classic for March 2018 belongs to Raymond and Betty Langley of Newalla Oklahoma. They are charter members of a wonderful Oklahoma Car Club known as the Canadian River Cruisers.
We were able to visit with Ray about his Classic Ford Fairlane Crown Victoria at the Annual Central Tech Auto Show, held yearly in Drumright Oklahoma along with the Central Technology Center’s Annual Open House.
The work soon began to bring the Fairlane Crown Victoria back to better than new condition.
Hey gang, this 1950's glimpse of the future lets us know that self driving cars are coming sooner rather than later.
The excellent paint and body work on the Ford Classic was done by Susan Miller of Pink Oklahoma. As you can this classic Fairlane is straight!
Ray and Betty’s son, James, did the rebuild on the Ford 272 cubic inch V8. The Ford specs on the 272 show 162 horsepower and 258 pound-feet of torque.The 272 V8 is coupled to a three speed standard transmission with column shift.
Ray completed the interior himself by using an interior kit from LeBaron Bonney Custom Auto Interiors. As you can see, the interior is better than when it left Ford.
The Classic Ford rides on fifteen inch painted blue wheels with the original looking Ford hub caps and of course classic wide white wall tires.
Ray cleaned and polished all of the stainless steel parts, which he brought back to like new condition.
The Cimarron Starlite Cruisers sincerely appreciate Raymond and Betty Langley of Newalla Oklahoma for sharing their 1955 Ford Fairlane Crown Victoria as our Great Oklahoma Classic for March 2018!
http://slauener.tripod.com/index.html
That was back in 1956...look at where google's technology is in 2017.

The electric motorcycles are coming!

Mazda Has A Gas engine that acts like a diesel:

This guy describes it pretty well, as I watched the Factory Video which left me puzzled.

The need for SPEED:

A Friend of Pablo is planning a 48 state photo tour