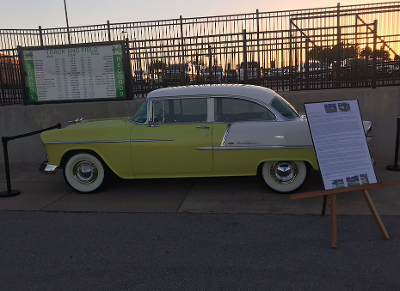 The club has an opportunity this Sunday, JUNE 20th, Father's Day to do a "Show and Shine at Victory Church, on 77 north of the On-Cue station on North Flood Avenue. Space is a little limited, so we ask that you sign up for this with Terry O'Dea by texting him or calling him at 405-641-7718 and letting him know you will be there. It runs from 8AM Sunday morning until 1:30PM and covers 3 or 4 different church services. They will have a special place for us to park. They will have coffee available for you and several food trucks are supposed to be there. Again, be sure to let Terry know you want to participate so he can keep track. Thanks for doing yet another cRc community service project.
Two new cars for sale on website. Click here to go there.
Our roving reporter James Hileman brings us photos from far and wide as he wanders from car show to car show, finding classic cars to photograph. Today's photos are from the Madill car show. Madill is located east of Ardmore. Some nice cars are in this show. Thanks Gary for the photos. We have some great classic cars, both original and custom in our state. 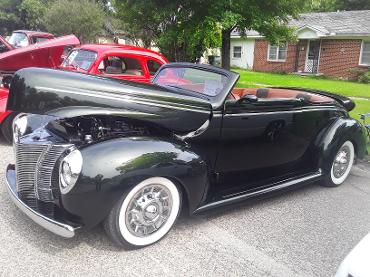 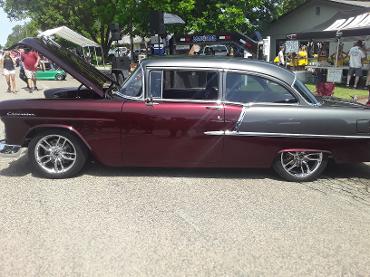 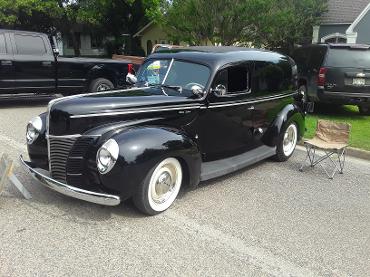 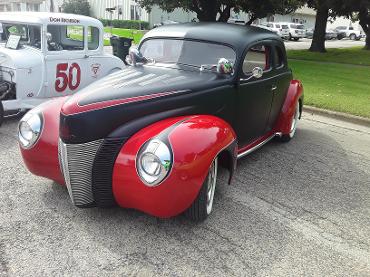 NOTE THE CHANGE FOR JULY 17- the club will participate in a show and shine at the AAA Insurance office on Porter Ave from 8-12,  in lieu of our regular coffee at the Goldsby Airport. We will return to goldsby in August.

Posted on Monday, June 14th - GREASE IS THE WORD! And a nice article in Sunday's Oklahoman  with a nice write-up about the Canadian River Cruisers loaning cars for the LYRIC THEATRE remake of GREASE. This 2018 photo of our charity car show appeared in the article.

The club adds JW JONES (JJ) and his lovely 1998 Mercedes Benz 500 SL convertible hardtop as a new member. We are pleased to have you. 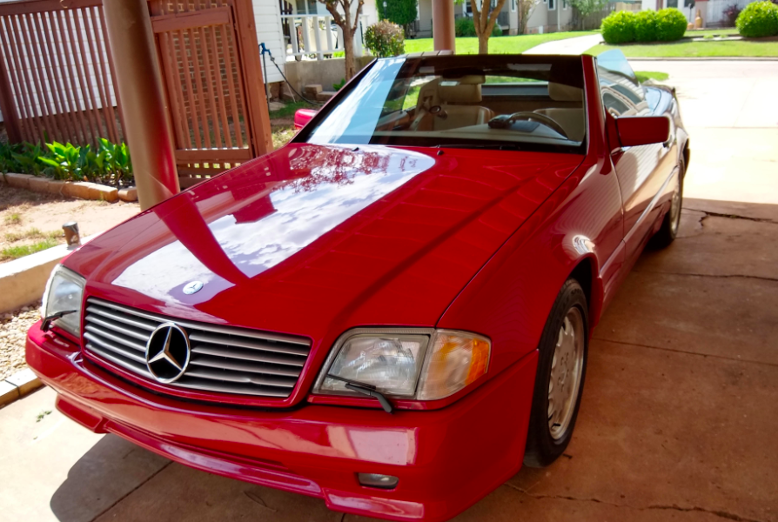 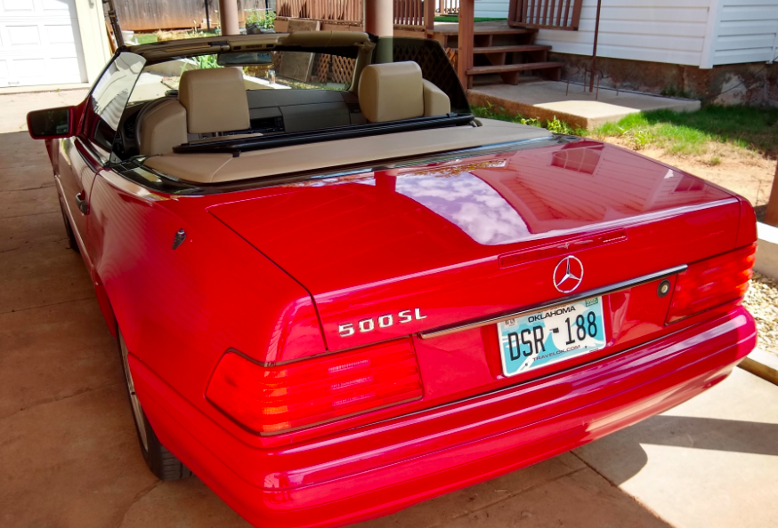 "GREASE IS THE WORD"......for the next two weeks in OKC as the cRc provides era cars for the LYRIC THEATRE OF OKC production of the remake of Grease. Featured below is Charlie's 1955 Chevy "MARTY"....at a rehearsal. 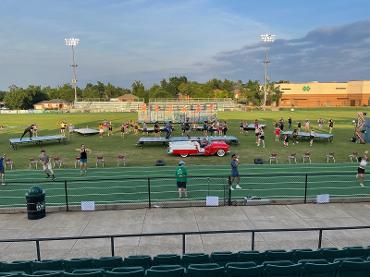 Lyric theatre Production/Company Manager MATTHEW SIPRESS, ready for a cruise, takes "MARTY" for a spin at the theatre venue, Bishop-McGuinness stadium. Matthew is one of the caretakers of our cars during the weeks they will be garaged in OKC. 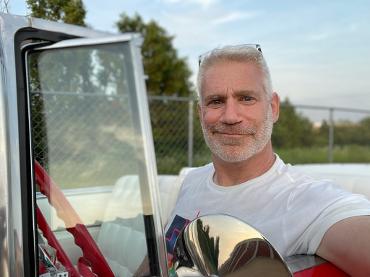 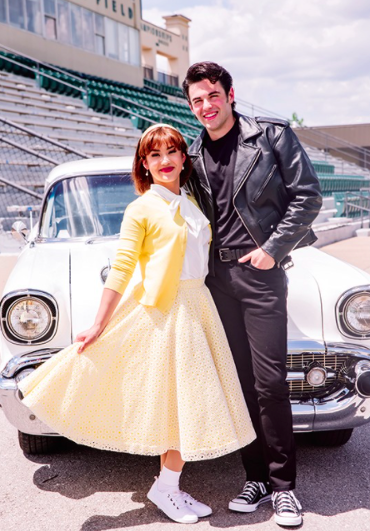 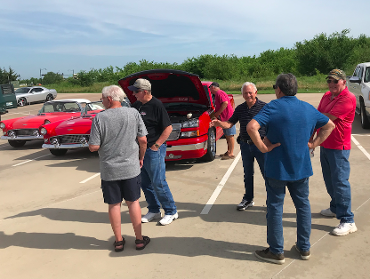 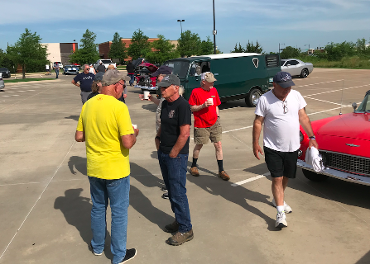 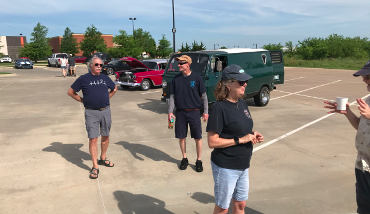 Small turnout at Midway this morning for coffee  as water was the operative word of the morning. Terry took this video this morning....
Congratulations to the OU women's softball team for winning the World Championship title!!!! 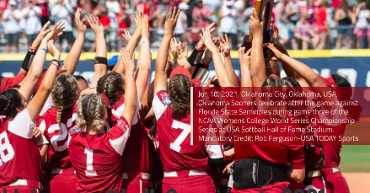 James H Also won a new pellet Grill I think he will be cooking soon .......I am sure he will let us know when. I haven't found anything for June 12 but looking.....Ray 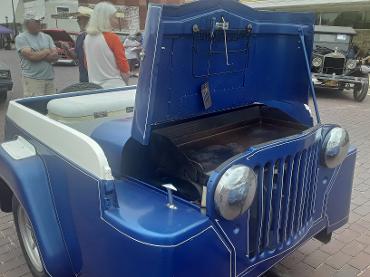 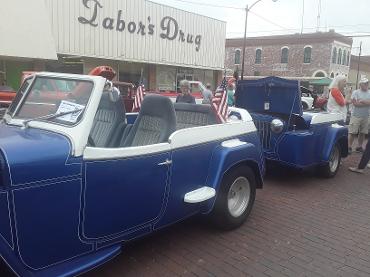 P0sted Monday June 7th - Terry O'dea happened to be grocery shopping this past week when the ran into Miriam Paulus and so he enquired about Eddie. Miriam said that Ed was at home doing fine, and is currently using a walker to get around the house and to prevent falling.

Posted Saturday June 5 - Midway Grocery and Deli - this shot of coffee call at midway was taken this morning. 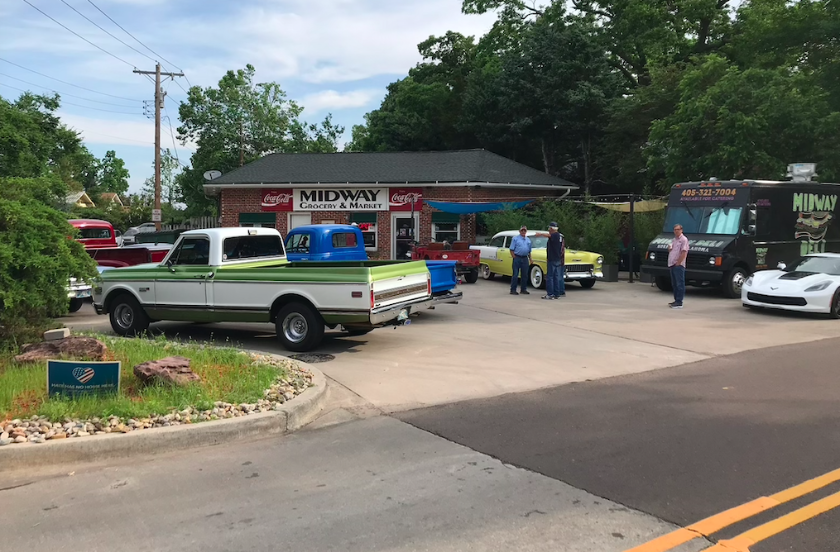 The swap meet is ON FOR THE FALL....we already have our spaces reserved! 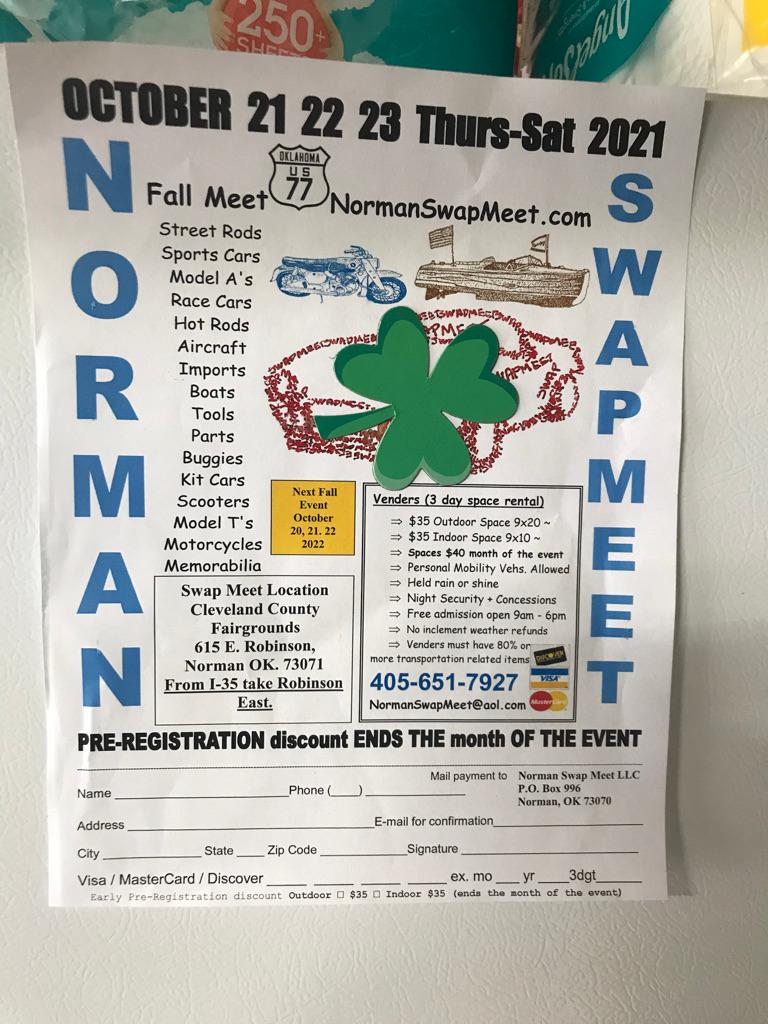 Terry O'dea, Charlie Lunsford, and Dave Saunders made a trip to North OKC last week and some of their tri fives will be featured in the LYRIC Theatre of OKC upcoming production of the revival of GREASE. The show will be held outdoors at Bishop McGuinness football stadium and Charlie's 55 convertible will be the get-away car for the finale. Dave and Terry's cars will be available at the stadium for a photo op before and after the show. The LYRIC has given the club a few complimentary tickets to thank us for the cars and so if you are a GREASE fan and would like to go one evening, please text Terry at 404-641-7718. Be sure to tell Terry in the text who is texting so he knows you are a cRc member.

Rumor has it the Vince purchased that fantastic Lexus convertible from Marshall...........keep 'em in the club.

On Saturday, May 22nd, the rain held off and we turned out for a show and shine open house at the Carlstone Independent Living Center on Robinson. What drives this club? Free coffee, more donuts then we could possibly eat, free hot dogs and hamburgers, and freebie goodies. Several members took tours of their nice facility and and we eat what we could but still fell short of what they had........the rain held off than we all had a fun time. Thank you Judy Ernst and Chad Ernst for making this a fun joint event!

We said goodbye to Zack the Elder's cars, both were there and both are going on a cross country adventure and will end up in massachusetts in a few weeks. And then Ron Borum unveiled his newest little microcar, a beautiful Fiat 500.......a real one, not the newer retro Fiat. It is VERY well restored and several of us wanted to take it home, but ron said no way and that was that.

Lani drove the "green frog" and so we had two fun microcars on display.

Posted May 20th - this week in the cRc

We donated $250.00 from the 50/50 pot at the Trails to Food and Shelter. We got a nice thank you note from our favorite charity. We laid our good friend Zack McCain to rest. The family received special permission to have Zack's remains and his casket as part of the funeral procession to Sunset Memorial Cemetery. Well played Zack, well played.

We met with representatives of the Lyric Theatre about how to provide classic cars for their June performance of Grease in Oklahoma City. Charlie Lunsford will provide the convertible for the show's finale.

We received a request from Rivermont to do our normal show and shine there, sometime in June or July.

And Zack the younger has wandered around and found another guest vehicle. This one is a 1939 Chevy Sedan Master Deluxe......someone will soon have a very sweet ride.

Like father, like son.........the cRc would like to welcome two new members, Quinn (right) and Mike (left) Robertson. Quinn has a great looking 1970 Land Cruiser FJ-40 while dad owns a sharp 1974 Bronco. We welcome both to the club. 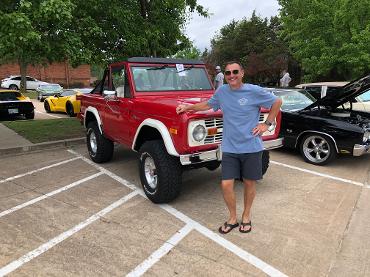 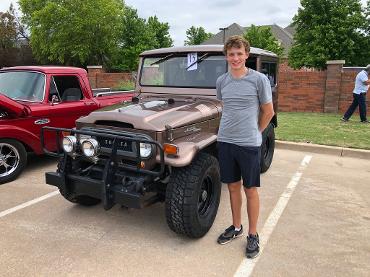 Posted Sunday, May 16th - we had a very good turnout in support of the trails country club and golf course. We had over 50 cars, most of which were club cars, plus a nice showing from the Mustang Thursday Night Cruisers. Lots of coffee, donuts, pastries, and hot dogs were consumed. Several long term members including Jim Wade and James Harp, who we have not seen in a long time, wandered in. It was good to see everyone. 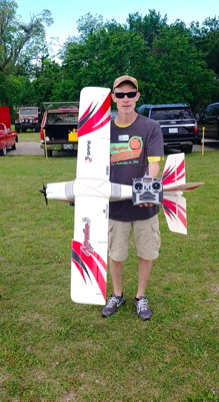 Posted Saturday, May 8 - and planes just kept falling out of the sky. On the simulator that is. Meanwhile on the runway, we didn't get many airborne but can we ever build classic cars! So just maybe, becoming a pilot at age 60-80 is not our thing. Rumor has it that we single-handedly crash more planes than in the entire history of the Radio Controlled Aviation club! Everyone came and left in good spirits, except the man who caught a $10,000 jet engine on fire. He was not pleased.

They had a nifty virtual simulator that some of our members worked with. If you crashed the plane, you just hit the reset button and were off and running again.

And of course there was the real McCoy which some members tried.......and tried again. A great day for the cRc and fun was had by all. Thanks David DeSelms for hosting us and putting all of this together.

We registered 112 cars, which is more than we have ever had at Rose Rock in the past. Our club has been rebuilding this show in Noble for the past 4 years. 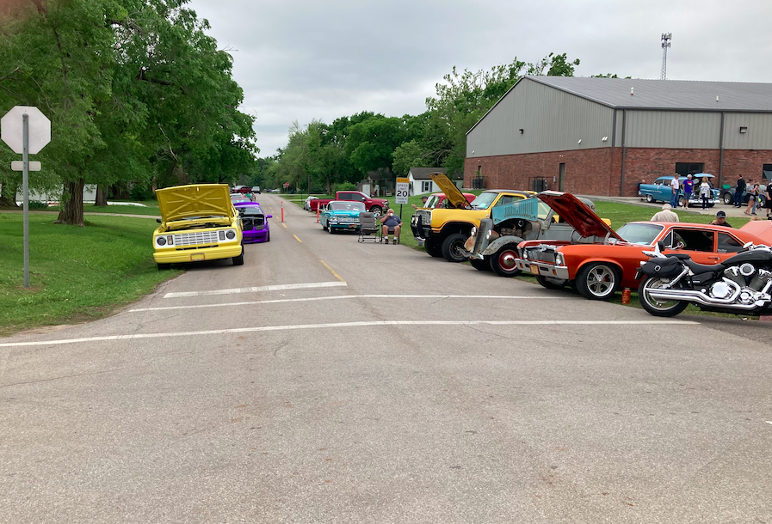 Estimates of 5000 people present during the cRc classic car parade. Then they all came over to look at our cars. 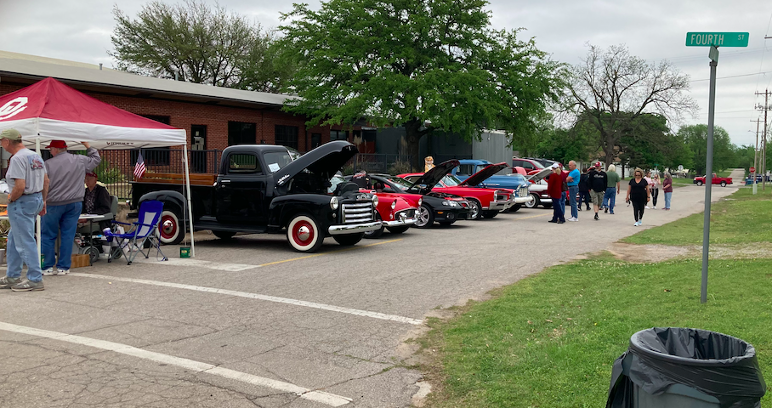 All in all, a great day for the partnership between the city of Noble and our club..... 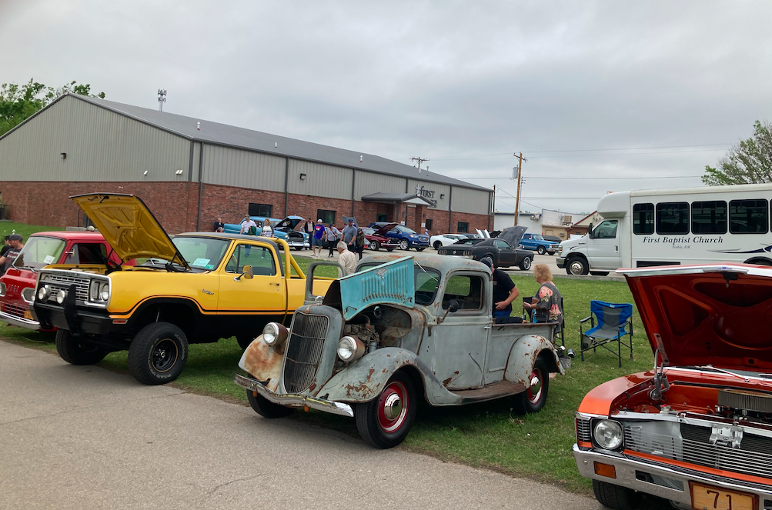 And then it happened to be Wayne Saunders' 80th birthday and since we NEVER PASS UP the opportunity to eat a piece of cake with a friend - there was the cake behind Wayne on the table. A good time was had by all. Thanks to all the members who worked so hard to make this first big event of 2021 a great success!