We are in the planning phase for 2018, our gala 10 year anniversary. But before we leave 2017 in our rear view mirrors, there are some things we want to pause to remember.

-We held coffee call once a week for the entire year, concentrating on Rudy's, Whataburger, Midway, Johnnie's Broiler as our go to spots. in 2018 we are going to add J-Pat's (Boomarang) back to the mix.

-We tried Hassler's for coffee call and Jimmy's Egg, but they didn't work. Not enough parking at Hassler's and we were too far from our cars at Jimmy's egg.

-The club raised and donated $4,981.00 to Food and Shelter as proceeds from our car show. Former mayor Bob Thompson arranged for the club to move our show location into Andrews Park, and that made all of the difference.

-Midway grocery, our club worldwide headquarters donated 100% of their food sales at the car show to Food and Shelter, and paid for the club entry fees for the Christmas parade. They also donated all of our leftover main course from the Christmas party to F&S.

- Gene, Deborah, Eddie, and Miriam Paulus as well as the other folks at Mastertech spent a long Friday and early Saturday getting their car repair business "food service ready" for our Christmas party. Ann, Deborah's mom, donated many of those great door prizes. Floyd Yates and June Wilson donated others.

-Midway's two delightful ladies Mel and Rachel came to the party, set up and served, and then Rachel blew our socks off with her beautiful operatic voice. To top it off, she sang O' Tannenbaum in German!

-When the club learned that the city might not have enough turkeys for the annual Thanksgiving dinner, you sprang into action. Wayne Saunders went out and purchased turkey's, yams, cranberry sauce and other items and drove over to F&S to donate them. The club took up a $602.00 collection and sent that money to buy food. Wayne Lewis drove over to F&S and made a personal contribution.

We participated in Norman's CROP WALK with a display of cars for the walkers.

-We do a regular Thursday night cRuise-into Hollywood Corners. Again, your car show guys coordinate this. Lawrence Terry and Billy and Mary Henry can be seen there most Thursdays.

-We participated in both the Spring and the Fall Norman Swap meets, where members drink gallons of coffee, eat donuts, and swap parts and car stories with others. A special "shout out" to Dan and Twila for running the event, for Lawrence Terry, Billy Henry, and Ken Dewbre who are constantly working the booth or the lot. This is one of the most fun 3 day periods anywhere and we are always there.

We turned out at STASH to support the women's Resource Center.....

-Terry O'dea and Midway organized the successful Christmas parade and we tied for first place with OEC for best theme. Terry also heads our Veteran's committee or one and interfaces with the city of Norman on the static display of classic cars for the Veteran's Day initiative. Terry also organized our participation in this year's Noble Rose Rock festival parade.

Ray Langley is behind the scenes selecting the best car show of each week for club members to attend. Our club has a very dedicated car show group who represent the face of the club. Juan, Little Al, Big Al, David P., Floyd, Wayne and Ray....there are others.

-A member made an anonymous donation of $100.00 to Full Circle Adult Day Care in the club's name.

-The car show gang, led by Floyd Yates, held 3 car shows this year to raise seed money to fund our Norman cRc car show. 2 were at Thunderbird casino and one in Noble. As a result of their efforts, we don't have to dig into the club funds to buy trophies, portapotties, and the like.

-Jim Hoffman is our club treasurer and keeps account of our club funds. We raise money only as needed to do things like pay for the next Norman Swap meet space and fund the main course at the Christmas party. We do not and never will charge dues.

-Carol Hoffman planned and executed a great fall cruise to Medicine Park and Mount Scott, and she is planning a spring cruise for 2018. More than 20 cRuisers made the trip.

-We did a display for the OU Foundation benefit dinner one evening at railhead event center.

-We planned and executed a Christmas potluck for over 110 members, and were all treated to the lovely sounds of Midway's "Rachel", a wonderful evening.

-We held several "community service" events during the year. STASH and the Norman Art walk, The MERCURY event center, and Railhead event center for the OU Foundation were examples. We also tried to assist some of the long suffering Lindsey Ave. merchants with evening cRuise-in's to Sonic, Ray's BBQ, and Penny Hill Deli.

I know I have missed a bunch of people and events that we did during 2017, but you get the idea. This is a special club with special members. It is you who make it special. Thank you for making our 9th year as a club, such a good one.

We came, we ate, we SAVORED,

ANATOMY OF OUR CHRISTMAS PARTY

Today was a magical day for the club. For those 100 plus who joined the festivities and attended the 9th annual cRc Christmas party -well, you know exactly what I am talking about.

How else can you explain to your friends and neighbors about a lovely opera rendition of Silent Night, a GERMAN singing of O'Tannenbaum, and a gourmet meal in a building which normally repairs cars from Monday thru Friday.

This is one for 60 MINUTES.

I believe that those who have been involved in the planning of the evening's event deserve a silent applause, whether it be Terry and Becky O'Dea's parade effort, Jim and Carol Hoffman's work behind the scenes to be sure everything was well funded and executed, to Harlan and Kelley Butler's effort on the annual Christmas music tape (yes Harlan puts all that together and Kelley finds those red and green beads for the great game we play), to Gene and Deborah, Miriam and Ed (and all the other guys and gals of the Mastertech team) for the amazing transition from car shop by day, to THE MOST ELEGANT EVENT CENTER IN OKLAHOMA BY NIGHT. Let us not forget Ann, who is Deborah's mom who lives in Tuscon and spends endless hours at a casino (someone as to do it!) to earn those nifty door prizes we take home. Thanks also to Floyd and also June for the more auto related door prizes. The crock pots, blenders, woks, and kitchen prizes are Ann's....shop rags are Floyd's!

And Midway Grocery and Deli? Last year we all enjoyed the sweet slightly country, slightly contemporary religious sounds of Midway's Darci who has since married and departed....but THIS YEAR? Well Rachel just sang our socks off with her beautiful operatic voice. We only asked her for 3 Christmas songs but we could have listened all night.

Where else in the world could you hear a Broadway class voice amongst the hydraulic lifts with cars waiting for repair.

MIDWAY does so much for the club it is hard to quantify. The brisket, the turkey, the dressing, the gravy were all Midway products. Mel, the Midway manager and Rachel gladly served the meal to our club and then participated in all of the events.

Bob and Midway paid for the club entry into the Norman Christmas Parade as a "thank you" for our coming to their restaurant for breakfast. Let's be sure to thank them the next time we are there.

The conversion from shop to restaurant takes about 2 hours. Cars are moved out, the floor is polished and Diamond-Zorn delivers 80+ chairs and tables.

Once set up, tablecloths are added for a Christmas flair. It takes 45 minutes to setup and test the sound system. In the meantime, the hot food from Midway is brought in and the warming trays are set up and started.

Name tags, door prize tickets, t-shirts, Chuck plaques, hats are all readied for display. And then the members begin to arrive, slowly at first, because a number of our members are fulfilling our club mission, which is to give back to the community - which they do by showing their cars in the Norman Christmas Parade.

Soon the paraders arrive and the serving line opens...... wow the food is wonderful. Homemade side dishes and desserts no restaurant can match.....and for just this one time in the year we allow ourselves to relax and indulge.....and the results are wonderful.

In the videos to the right, if you were not able to attend, (and we fully understand that as the cRc is competing with many family and corporate events for your time)......well you should view them one by one, especially the ones where Rachel sings the Christmas carols..... which would be "part 3 and party 51", and then if you have the time, view the "What are YOU driving game"....maybe party 7 or 8 and then if you want a good laugh....sit back, relax, but DON'T turn the speaker volume up too much, and enjoy the cRc DIPSTICKS as Rachel and First Christian Church choir member (and cRc member) Harold Jones help us through this year's fractured Christmas carol "Barrett Jackson's comin' to town". 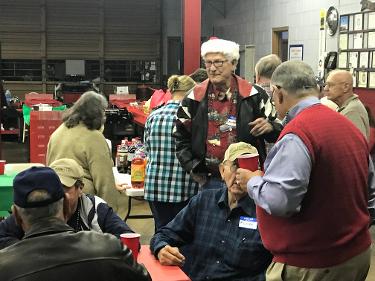