Juan M. Villarreal was born on June 23rd, 1944 in Tivoli, Texas. Juan served in the U.S. military for 21 years and served in Vietnam. He retired as a MSgt. E7 and received medals such as the Purple Heart, Silver Star, and 2 Air Force Commendation Medals.

After Juan served in the military, he furthered his education and attended college, received his Master’s Degree in education and began teaching at various Oklahoma City public schools in the ’90s, and then became asst. principal a few years after he was a teacher. He was beloved by those who worked under and with him as well as his students who knew him as “Mister V”.

After retirement, his favorite hobby was participating in car shows with his many beloved cars and was a member of the Mustang Club and loved spending his time with his best friends who shared a rich love for their cars.

This nice tribute to Juan and his involvement with the CRC was featured in the monthly Oklahoma Mustang Club newsletter. Thanks OMC!

The car show community hereabouts lost a regular contributor/attendee last week when Juan Villareal (76 years young) lost his battle with Covid-19. So, I’m calling an audible vs the normal themes for this month’s “From The Editor”. I do this for a number of reasons but principally because Juan, and the rest of the Canadian River Cruisers “Car Show Gang” as they were called, were regulars at so many local shows and especially at our OMC events. Let alone the fact that Juan proudly drove a magnificent ‘08 Roush. While not an OMC member, Juan and rest of the Norman-based CRC guys were always at the shows, typically very early, parked together and in impres- sive numbers. If you watched them, it was a cool thing, how these mostly “tenured” gents yucked it up and had a good time. I always felt Juan was one of the more gregarious members of the CRC bunch; perhaps because we had a common bond in the Ford Mustang and he always had something to say about whatever car I showed up with. I know this... he was very partial to sports-roofs! The Canadian River Cruisers are going to miss Juan, as he was a big part of the club’s long-time, very successful charity efforts to support Norman Food & Shelter. If you get a chance (at this point there doesn't appear to be a conflict with any OMC event) consider taking a car to the CRC’s big annual show in July at Andrews Park in Norman. They do a great job, it’s a nice venue (all on grass) and of course all for their great cause. With COVID-19, like our experiences last year, the 2020 show was canceled. I was there for 2018 and 2019 and there were well over 100 cars. A good guy and Viet Nam vet, who leaves behind a wife, children and grandchildren, and I for one will miss seeing him at the shows. RIP, sir. Everybody take care, Chuck Dunn Editor 2019-2021 0244omcnewsletter@gmail.com

CJ: So, the highlight of any car show with the CRC gang is not the trophies, but the time spent sitting in the hot sun, trading stories.  Juan was always good for a story!  One story he liked to tell was how he persuaded his wife that car shows were a good use of his time on a Saturday.  In the beginning, Maria was not completely won over by the idea that Juan would spend so many Saturdays out at the car shows . . . until Juan won a pearl necklace at one of them.  Once he got home, he presented the necklace to Maria and, after that, she came around to the idea of sharing Juan on Saturdays with the CRC car show gang.  At least, that was Juan's side of the story.

Dave: Juan was a prankster, you can see it in his eyes. At one show, he convinced me to put bubble wrap under the rear wheels of Ray's car just before Ray was ready to leave. As Ray pulled out, he heard this loud "POP! POP! POP!" coming from under his car...

CJ: Summer will never be the same without Juan in it....

Two years ago at a July 4th show, Juan asked me to stand by my truck. He took a picture of me with my military tribute. He said he added the caption, "He's not one of us because he didn't get to serve, but he is one of us because he's a fanatical flag waver. " Juan said he sent it to a veterans group (don't remember which one). That meant a great deal to me.  My tribute is to remind people why we have the freedom to go to car shows, ball games, the rodeo,  etc. To work and worship where we choose. Not where a government says. Thanks Juan! After Vietnam he became an educator. So he served his country and his community. You will be missed! RIP James Hileman 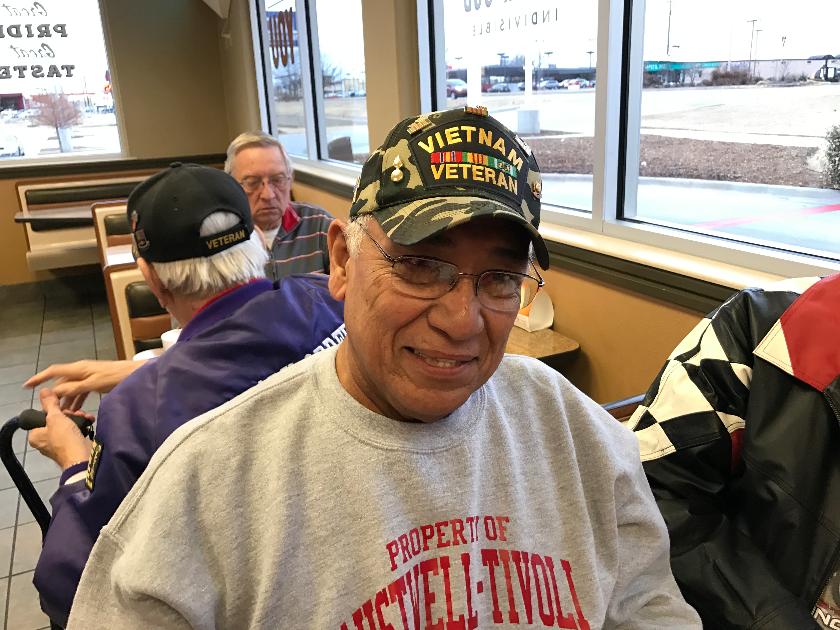 Juan joined the club about a decade ago, we didn't keep great records way back when there were 40 of us, but now that there are 300 families, well we just remember he joined us early, and left us quite early. If memory serves me correct, Juan was from south Texas, and found his way to Norman maybe via Tinker, where he settled down with Maria. Juan was a Vietnam Veteran and served his country proudly during his years in the United States Air Force, and also a proud Vet thereafter.

On any given Saturday you would find Juan at one of two places, depending on the season. If it was car show season, he would have his  Air Force Vietnam Veteran cap on and be in line registering for one of the cRc area car shows with what was affectionately known as the "cRc CAR SHOW GANG". Week after week they would roam the countryside, finding and participating in area car shows, making their registration fees to the various charities that are supported by these shows.

Late in the fall, when there were no more shows out there, Juan and his gang or many would show up at the weekly cRc coffee car, where the rest of us got an opportunity to see them and find out how each one had done.

How Juan loved that 427 Roche Mustang Fastback.  When he got that beauty, the world just stopped for him. It was his pride and joy and he LOVED to take it every Saturday to the scheduled show for the day. Once, it got a ding in the rear of it and we were not certain Juan was going to survive the repair process without a nervous breakdown. We worried and worried about the proper repair of that ding in the back.

Juan always loved banter, that unpredictable back and forth, be it at a car show, coffee call, or at the Norman Swap meet. He was especially up for a practical joke, once placing bubble wrap under Ray's tires, so that when Ray drove away, the tires all made "POP! POP! POP!" noises. Juan's had one of the best smiles we have ever seen, and he smiled a lot.

One year, we were in our booth at the Norman Swap meet when this blue 1940 Ford Custom Deluxe came rolling in and a FOR SALE sign was displayed on the windshield. Juan began licking his lips and said "Man, I may just have to make an offer on that car." And make an offer he did. Went home with in that very day. 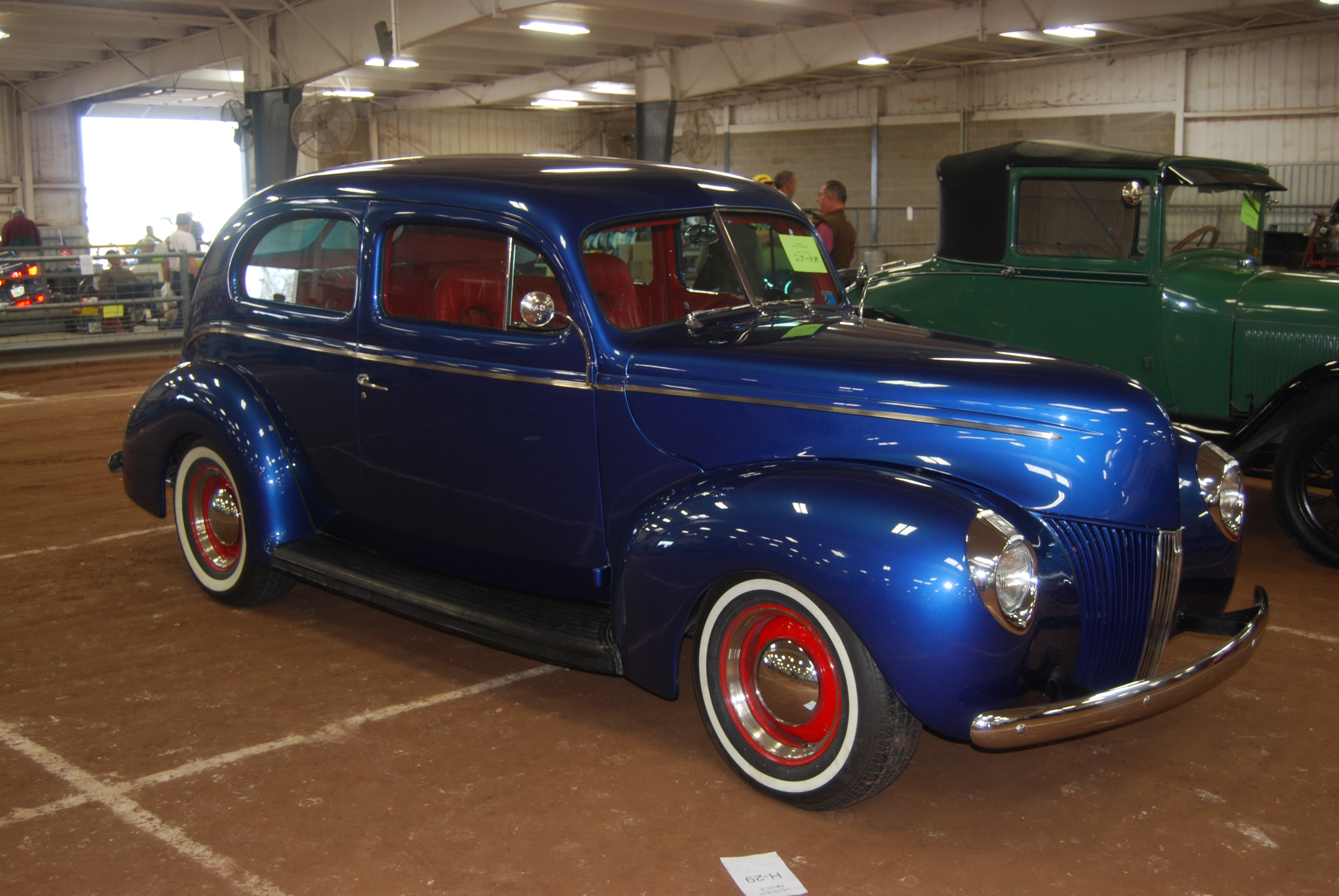 And that is the photo we took of the old Ford at the swap meet the day Juan went to the bank. Later we learned that he "probably" should have mentioned to his wife Maria that he was buying one, rather than surprising her by driving up in it. 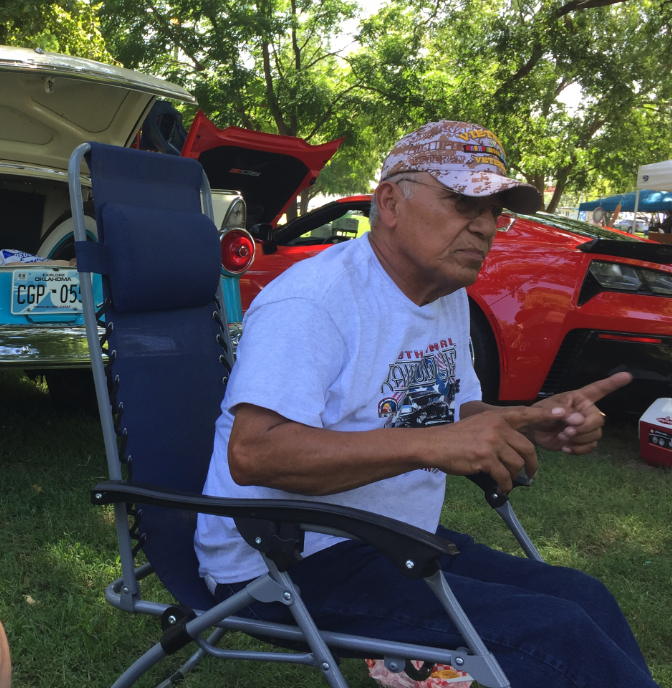 This picture shows Juan explaining either the length of a fish that was caught, or some other research he had done on the internet. Juan loved his cell phone and was a master at searching the internet. Often at coffee call we would entertain those around him with his discoveries from his cell phone.