CONFUSED ABOUT WHAT YOU NEED TO BRING TO THE TAG AGENCY, IN ORDER TO GET YOUR NEW OKLAHOMA DRIVERS LICENSE? It is as easy as 1-2-3! Just follow the steps below and take the required materials with you to the tag agency. 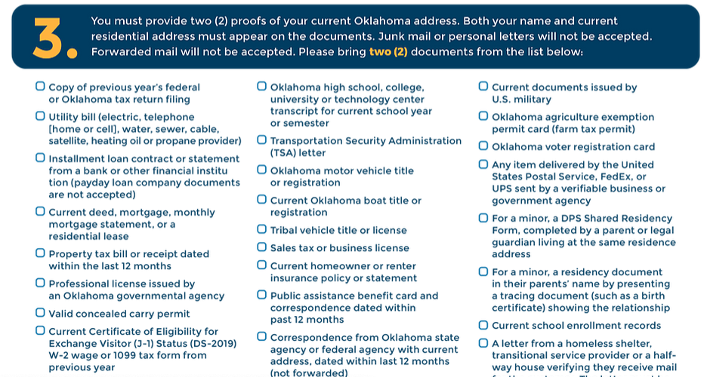 This is cRc community service project #16 -

a salute to a 102 year old Veteran on his birthday.

1. Raise money for Food and Shelter food bank which has been hard hit due to COVID - the club donated more than $7,500.00 to F&S March-April and then raised approximately $3,400 in October.

3. Collect and donate more than 300 hot-rod and sports car magazines to the Norman Veteran Center. -January

4. Provide 6 classic cars to the University of Oklahoma and coach Lincoln Riley for a photo shoot. -April

6. Repair and rebuild a 2008 Volvo 4dr for another community service group to donate to a family in need at BRIDGES. -February

8. Raise and donate funds for the purchase of picnic tables and umbrellas for the Norman Veterans Center. $750 donated. -May

9. Donate and deliver backpacks for needy to Food and Shelter. 51 backpacks collected and donated. January-February

13. July 8th conduct a parade to Newcastle to help a 6 year old celebrate his birthday. 11 cars.

15. The cRc Autumn fundraiser for Food and Shelter has raised over $2,400.

16. Twenty cRc members conducted a classic car birthday parade, at the Norman Veterans’ Center, to celebrate the 102nd birthday of a Navy Veteran.

17. Participated with the City of Norman in conducting the Cleveland County Veterans Parade.

19. Participated in the Noble Christmas Parade