Posted August 18, 2021:
What is a "TINY HOUSE" and what is the cRc doing?
A tiny house is the name being used for a successful project that Food and Shelter uses to get people off the streets and give them an opportunity to return to society. There are approximately 21 tiny houses on the F&S campus, one is pictured below:
These are small stand alone modern homes which have typical conveniences of air conditioning, cable tv,  and are furnished with used furniture. The contract goes something like this: As a homeless person, you and your family may use a tiny house for one year while you agree to work to find a career, a job, or other means of support. At the end of the year, or sooner if possible, the family moves from the campus and into their own home or an apartment. They may take the furniture from their tiny house to begin their life anew.
Typically churches or service clubs like ROTARY have committed to provide the approximately $21-25,000 required to build a tiny house. Other groups agree to furnish them and refurbish them when a family moves in or out. Because our club has done such good work in support of the Food and Shelter group, and because F&S has a contract to help homeless Veterans off the street, we have agreed to fund the first new tiny house in their addition.
We raise this money anyway, and now our funds will be channeled toward our cRc tiny house. Sooner or later (about 3 years) we will have raised and donated all the money to have our own F&S tiny house, and will have something tangible we can point to with pride and say "WE BUILT THAT!"  Our car show earnings will go to build house #1 in their new addition of 8 more houses. We have already raised over $7,000 for this cRc project! We have signed a pledge to do this and until our house is paid and the bronze plaque saying "this house built by the cRc" is on the front, ll our normal F&S donations will go to our tiny house funding account.
Results from CRC show:
Best of show 79 & older
Bob Canaday  1929 Dodge
Best of show 80 & newer
Andrew Jones  2016 Mustang
Food and Shelter pick
Windel Moore 2004 Mustang
Mayor Breea Clarke's pick
Justin Mathews 2020 Dodge Charger
Master Tech & Tribute pick
Charles Evans 1961 Ford Starliner
Fire Department pick
Dennis & Margo Mitchell 1955 Chevy
Police Department pick
Robin & Laurie Bartels 1970 Chevy El Camino
Kids pick
Travis Ezell 1988 Camaro
We had 96 non-member cars
We had 73 member cars
Total of 169 cars
That's a lot of cars for as hot as it was
Ray
Posted Sunday August 1st:

The alarm rudely intruded on my slumber at 0500 and I rolled myself out of bed. I had packed the car the night before with all the things I was supposed to bring. Had I forgotten anything?

Let's see: Orange cones  (Don't know where Harlan got these but they are really heavy), 3 pop-up tents, tie down spikes (Can't have the fickle Oklahoma wind tossing tents around $20,000 paint jobs), pre-cut twine, a hatchet to futilly pound stakes into the sun hardened Oklahoma clay. Coffee? Yes coffee.....Terry was going to bring the initial 48 cups coffee and the donuts , but we needed the Mr. Coffee to make more during the day.

Exciting news: A new can of Folgers was purchased, since we have been using the Maxwell House tin since before COVID and it still looked like ground coffee in name only. Packed away were all the sweeteners and creamers, coffee filters, check, check, check,  $100 in change to fund the cRc t-shirt sales, check.

We decided we needed only one coffee maker to supplement what Terry was bringing. And so as I took my first shower of the day (the best shower would be AFTER the show about 5 pm)...I pondered "what else do we need?" Bound to be something we are forgetting. (We of course didn't know at the time that the power circuit to the Pavillion was out and we would have to make coffee using the generator 250 feet away....back and forth, back and forth....sigh... life's little surprises.

0540 am: Arrive at Andrews park with the first load, leave the Model T truck, (briefly say a thankful prayer and note that Crossroads Rentals has already spotted our portalets)... go back to the house and bring the '57 Chevy which is also full of "stuff".

Other members are arriving with different supplies. Floyd with registration material, Terry with his truckload of various stuff including the early morning coffee and donuts and the critical key from the city which unlocks the park gate, Philip with his pickup containing the sound system and power generator, the computer to sort the winning ballots, Lawrence with all the trophies, Billy and Dan with lots of ice and water and coolers. It is amazing what it takes to put on a car show and how well our cRc team is organized. About 6 am, Ray and Wayne, James and Mitch and Al arrive and pop-up tents were being put up and tests and chirps from the now active sound system were heard, tables set up......the Pavillion was dirty so we will remember to add a broom to the list for next year and also additional trash boxes to spread around the park. Make a note Dave... and now by 0630 cRc host cars are beginning to stream in and park. Many more helpers: To name but a few, Charlie and Roy who were setting up the shameless cRc t-shirt and sales booth and the donation bucket which turned out to be a very  good thing for Food and Shelter.  Guest cars are also arriving to stake out prime shade spots. The early bird gets the shade. Members are showing people where to keep our fire lanes open. Everyone steps up to the task.

We marked off a central place for Midway Bob to set up his hot dog grill. Bob and Maricha and daughter Maddie have been doing this wonderful community give-back and they donate their time and all the foods and they do all the work. This year they added $841 to the money we are giving Food and Shelter!

April Heiple,  Director of Food and Shelter arrived and set up the Food and Shelter booth next to the sales booth. Food and Shelter is in the final stage of announcing they will build 8 more of their award-winning  "Tiny homes", which are used currently by 21 families  for up to a year as they get financially back on their feet and become functioning members of the community. This is a fantastic project with VERY GOOD results in terms of helping families off the streets and back into society.

The money that the cRc raised in this event as well as future contributions from the club will be earmarked to build one of the next tiny houses. The club will have a bronze plaque on that house when we complete the funding. It should take us two more years to pay for our house. We raised $6,888 today to allow them to begin construction when the project is approved. When this is done, the cRc will have a tangible thing we can point to and see how and where our money helped. We had almost 100 host cars this year and approximately 100 guest cars, all this on the hottest day of the year. The setting in Andrews Park is a nice one with some shade,  definitely cooler than in a concrete parking lot. All in all it was a day very well spent and we are proud to have been able to sponsor this event. Our club always amazes me, the way we step up and just effortlessly "get 'er done!"

If you did anything associated with putting on our car show, from registering to donating to attending to working, your efforts are appreciated. Thank you so much.

HARLAN BUTLER, who was a big supporter of Food and Shelter would be proud of how well the show went and what we accomplished. Thank you Harlan for your guidance. 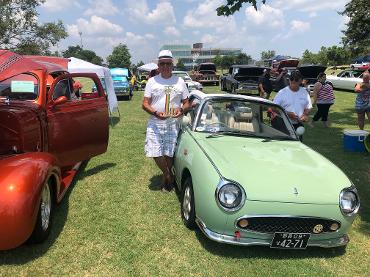 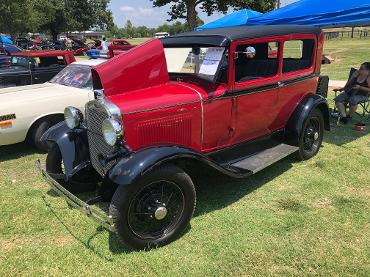